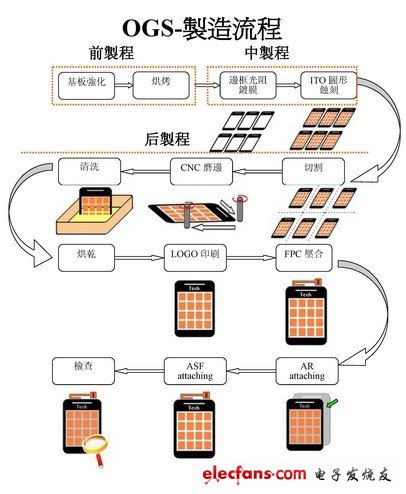 1. OGS will become the leading technology direction of the touch industry in recent years. OGS (OneGlassSoluTIon, integrated touch) has three advantages: (1) saving a layer of glass cost and reducing the cost of a single paste; (2) reducing the weight; (3) increasing the transparency. OGS can better meet the ultra-thin requirements of smart terminals and enhance the display effect. It is the inevitable choice for high-end brand terminals next year.

2. The evolution of OGS technology has been in a state of flux, and the interests of touch manufacturers and panel makers have intensified. In the direction of OGS specific technology evolution, touch and panel manufacturers have different opinions on technology selection. In order to maintain the independent industrial chain, touch manufacturers have proposed the TOL (TouchOnLens) solution to the upstream enhanced glass CoverLens integration; Vendors tend to in-house the touch process and propose two solutions for On-cell and In-cell.

3, Sheet mode has the most potential in the TOL solution. The sandwich method led by Shenghua Wintek has been plagued by problems such as secondary enhancement of the edge. At present, there are corresponding solutions. Compared with the Picec method proposed by TPK, the Sheet method can use higher-generation substrates and has a larger scale effect after mass production.

4, Apple-led On-Cell, In-Cell accelerated maturity. Samsung's monopoly position in AMOLED poses a higher challenge to the display effect of Apple iPhone and thinning power saving. Apple turned to the cooperation of panel makers Sharp and TMD, and invested a lot of money and technology to support the development of the screen and touch technology of the new generation of iPhone. Iphone5 has adopted In-cell technology.

5. In-Cell will become the ultimate direction of OGS. In contrast to the thinning effect, In-Cell is about 0.4 mm thinner than TOL and about 0.3 mm thinner than On-Cell. The "noise reduction" problem that In-Cell currently encounters requires the deep cooperation of panel manufacturers and high-end driver IC manufacturers, and Apple is having such industry chain integration strength, mass production is only a matter of time.

6. TOL has an advantage in technology maturity and mass production time, and will be the most cost-effective technology in 2012. In the future, the competition between Apple and non-Apple camps has been more focused on the panel, and the core position of touch technology is declining. From the current situation of industry chain competition, the non-Apple camp market is more spacious, and the focus will sink to the low-end, the cost-effective TOL technology (SheetProcess) will become the dominant in the middle and high-end market, accelerate the current G/G The fit scheme is replaced.

The main technology of the projected capacitive touch panel, which is based on multi-touch applications, is divided into film type and glass type. The Apple camp uses a glass type of glass instead of a glass type. The Pan camp is based on film type PET. The current mainstream film structure is lithography or printing on PET film, and the outer layer is called GFF (Glass-Film-Film). Structure, while the mainstream glass structure uses a touch sensor on the ITO glass, and the outer layer plus a protective glass is a GG (Glass-Glass) structure. The former is limited by the high-order ITO film material in the hands of a few Japanese merchants, the latter GG fit yield is generally low, both of which cause the cost of the projected capacitive touch module remains high.

In order to effectively reduce the cost of the touch module and meet the trend of thin and thin consumer electronics products, the touch industry has been actively developing and reducing the amount of ITO film or ITO glass in the past two years, and the development of OGS, in-cell touch or GF film technology. . OGS technology integrates ITO glass and protective glass into a piece of glass, which not only reduces one piece of glass, but also saves a bonding process. It is about 0.4 mm thicker than two-piece G/G products, which is estimated to save about 50%.

At present, professional touch module manufacturers such as Shunhong, Shenghua and Dahong are the most active in the development of OGS. Among them, Shenghua's OGS mass production shipments are the fastest. In 2011, it has been applied to many international brands. At the beginning, and introduced to the domestic first-line tablet computer manufacturers, in early 2012, the domestic touch industry is also actively investing in the development of OGS products, and began to send samples to customer certification. If the problem of glass strengthening and production efficiency is broken, OGS is expected to become the new mainstream of glass touch technology in the future.

Compared with the external professional touch module factory, OGS technology is actively deployed. The main TFT or AMOLED panel factory tends to develop In Cell Touch, which directly divides the sensor into the display and can be roughly divided into In-cell and On-cell two technologies. The advantages of in-line touch can also save a piece of glass and a bonding process, but since the introduction of the embedded technology panel factory must have LTPS technology, the entry threshold is relatively high, and the current process yield is still low, in the short term The effect of the external touch panel is small.

However, in Apple's support for embedded technology, and recently actively cooperated with Japanese and Korean industry, Samsung will also launch AMOLED applications with On-cell touch technology this year. The market for embedded touch is still not allowed. Xiao Yan.

In 2012, the glass-type touch panel under the competition of OGS and embedded technology is launching a wave of touch technology to lighten the market. The industry pointed out that the touch market is under the development trend of OGS. Outside the original sensor and module factory, the protection glass industry and the color filter factory also have the opportunity to cut into the field of touch modules. The revolution of the touch industry is ready to go. hair.

It is worth noting that Samsung and its partner suppliers in South Korea plan to build the latest OGS production line and actively deploy related strategic supply chains. For example, the key OGS sputtering equipment technology is expected to be developed by Taiwanese manufacturers. Confucian precision to provide, it is understood that Samsung Group may reverse the past touch module factory procurement model, set up part of the touch production line in the house, revealing Samsung's change in the touch supply chain strategy, it is worthy of domestic industry's attention