The key to optimizing the working life of LED bulbs

LEDs require a circuit driver to convert a standard AC voltage into a usable DC current and voltage.

In order for LED bulbs to be compatible with standard luminaires without sacrificing their operational life, designers must integrate the driver circuit with the bulb in a way that does not increase the potential failure mechanism of the bulb.

The drive circuit converts high AC voltages to low DC voltages, so electrical isolation is necessary. One solution is to use real-time waveform analysis to detect the LED current through the primary side of the isolation transformer so that tight constant current regulation of the LED string can be maintained without direct feedback from the output.

The two-step scheme for driving the LED is to use a boost converter on the front to provide the required load impedance for the dimmer (reducing the inrush current that can cause damage) and to increase the circuit by making the input current in phase with the line current. The overall power factor.

Governments around the world have introduced regulations requiring the phasing out of incandescent lamps, which has driven the transition to solid-state lighting technology. LED lighting has significant advantages over traditional methods, especially LED bulbs that increase lumen performance per watt and reduce the cost per lumen.

The main benefits of LED technology over the replacement of traditional incandescent lamps are longer working life and lower operating costs per watt hour. The robustness of solid-state lighting technology is an important selling point for consumers compared to relatively fragile incandescent and fluorescent lamps. The typical life of an incandescent lamp is approximately 1000 hours (Reference 1). LED bulbs claim to have a working life of more than 50,000 hours (Reference 2), while at equivalent light output, the power consumption is only about 20% of the former.

However, if the designer does not take the necessary precautions, LED lighting may not be able to honor the consumer's commitment to replace the bulb for about 25 years. The complexity and reliability of LEDs and their driver circuits (which must also be compatible with traditional dimming techniques) are issues that designers must consider to achieve the longest LED lighting system operating life.

The normal operation of the LED requires a constant DC current, and the voltage is much lower than the rectified AC line voltage, so it is necessary to reduce the standard AC voltage to a usable level of the drive circuit. To make an LED bulb compatible with a standard light port, the designer must integrate the driver circuit into the lamp. If not handled properly, this integration increases the likelihood of mechanical failure of the LED bulb.

Previous LED bulb drivers required a large number of external components, high-priced isolation components, and special design strategies to prevent long-term aging problems (such as electrolytic capacitors). Now, the integration of the driver circuit makes the lamp more prone to reliability issues such as early failure or a reduction in MTTF (mean time between failures).

The MTTF is a measure of the time to first failure and is usually calculated as the FIT rate of each component in the circuit (per 1 billion hours of failure rate). Since the driver circuit is required to reduce the large AC voltage (100Vac/220V ac) to a dc voltage that can power the LED, electrical isolation is required for safety reasons.

In a typical electrically isolated AC/DC converter, a discrete optical isolator (or optocoupler) is used to provide feedback from the secondary side to the primary side controller, which converts an electrical signal into an optical signal. The signal passes through the light barrier and then back to the electrical signal (Figure 1). Because the FIT ratio of the optocoupler is higher than that of the semiconductor component, the MTTF specification of the entire circuit is lowered.

In addition, due to the effects of aging, the current transfer rate of the optocoupler may change with time and temperature. This change will affect the loop stability of the power supply and shorten the life of the LED driver circuit. While many LED lights and fixtures can operate at high PCB temperatures, designers must eliminate these weaknesses to achieve longer life. 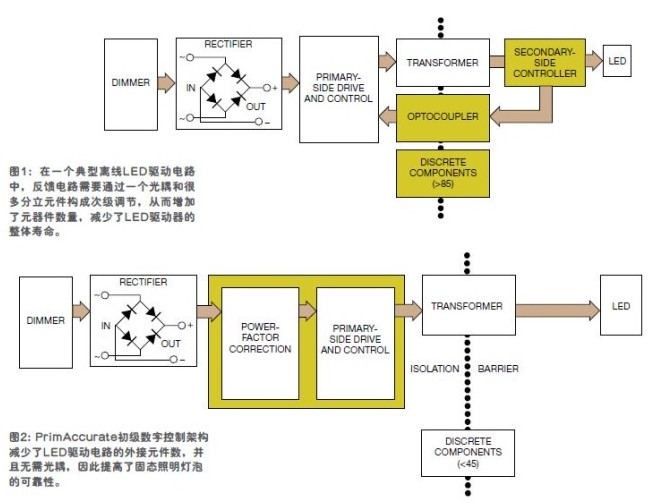 Another benefit of this technology is internal feedback loop compensation, which simplifies the design and reduces the number of external components. In particular, it does not require optocouplers, which have the highest FIT ratio, which improves the reliability of the LED driver circuit. The overall reliability of the bulb.

LED bulbs produced today must also be backward compatible with existing lighting technologies in the home. Dimmers provide ambient lighting for the home, and one of the benefits of LED lighting as an alternative to incandescent lamps is that it can be easily dimmed and more effectively aligns with incandescent bulbs than fluorescent lamps.

However, to support the dimming function, the LED driver needs to control multiple factors, including dimmer detection, compatibility, and light flicker. To optimize the operating life of the lighting system, one concern when using dimmers with LED drivers is durability.

The LED driver is actually a current source, and its input has high capacitance to the dimmer. When the power is turned on, a huge inrush current will be charged to charge the capacitive load, and then stabilized to a A much lower current level. This surge current can damage the standard dimmer and must be reduced to avoid damaging the life of the dimming circuit.

One solution to the dimmer surge problem is to use a two-stage approach to drive the LED instead of the direct flyback converter method, which has a high capacitive input impedance. In a two-stage approach, the primary is used to boost the impedance to a controlled level, which reduces the inrush current and provides the required safety and protection for the dimmer.

iWatt's iW3616 LED driver (Figure 3) uses a two-stage solution with a dual-function initial boost converter: first, to provide the required load impedance for the dimmer, reducing inrush current; secondly, The input current remains at the same phase as the supply current to increase the power factor of the entire circuit. This solution not only extends the life of the dimmer, but also produces a high power factor. The digital block that provides primary-side control in the iW3616 includes detection algorithms that work with virtually any off-the-shelf dimmer on the market. The same algorithm also controls the boost converter to optimize the dynamic input impedance of the circuit to improve power factor and reduce inrush current. 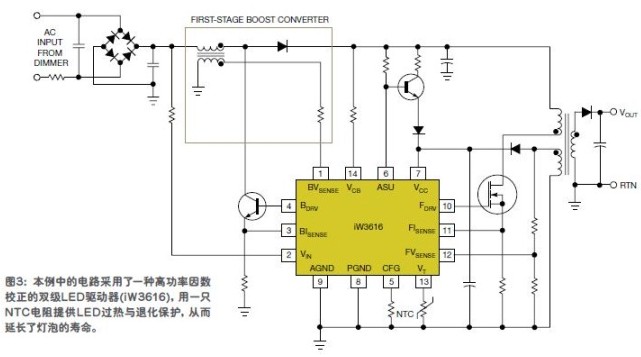 An equally important consideration when optimizing the LED lamp's operating life is the life expectancy of the LED itself. As with all semiconductor components, the higher the junction temperature of the LED, the shorter its life expectancy. Electrolytic capacitors also have an expected life, also depending on the operating temperature.

One solution is to reduce the rated drive current of the LED and simply use multiple LEDs to produce a specific amount of light output so that less heat is generated on a single LED, thus lowering the junction temperature. This method can extend the working life of the lamp, but in exchange for higher solution costs, because more LEDs are needed. In addition, it can not adapt to external factors, such as the physical size characteristics of the luminaire, the heat may exceed expectations.

Another method is to optimize the maximum current of the LED, that is, set a maximum junction temperature, which will trigger the LED current to drop to avoid aging. The existing digital LED driver controller implements a two-stage protection mechanism that allows the designer to set the maximum LED temperature with an external device. Place an NTC (negative temperature coefficient) resistor near the LED junction as a temperature monitor. The NTC resistor is connected to the LED driver IC and the temperature feedback device is used to protect the LED.

The iW3616 in Figure 3 uses an NTC device to protect the LEDs in the LED bulb. If the LED junction reaches the maximum temperature threshold set by the NTC component, the controller reduces the LED current at 10% intervals until the temperature stabilizes. . If the temperature drops, the LED current steps back to its maximum setting in the same reverse 10% step and has the appropriate amount of hysteresis to prevent oscillation. In the event of a major fault event, the fail-safe mode reduces the current through the LED to 1% of the preset output current. This overheat protection structure provides design flexibility for the LED bulb and will still provide complete bulbs under extreme operating conditions. Protection, designers no longer have to worry about such problems.

LEDs have evolved to a stage where cost and light output can compete with other competing solutions, and LED lighting is working hard to become a practical alternative to home incandescent lighting. The key to the success of this new technology is the implementation of the drive. To ensure that the LEDs truly have a long working life, in addition to the efficiency and cost parameters that designers are trying to optimize, other factors are also critical, such as temperature, dimming control and reliability.