Gaogong LED Weekly Report - The Truth Behind the Performance of "Beautiful"

It can be seen from the list of transcripts of various enterprises that nearly half of the enterprises' revenues or profits or "camp" and "profit" doubled down, and even some enterprises suffered losses. The net interest rate of only 6 companies of 24 LED listed companies exceeded 10%.

â—‡ Display focus (1): The overall profit is higher and the market tends to concentrate (click for details)

The ex-factory price of the knife is only 0.5 yuan! (Click for details)

The truth behind the performance of "Juli"

In March 2016, most companies in the LED sector have submitted their transcripts for 2015. From the list of transcripts of various companies, it can be seen that nearly half of the company's revenue or profit or â€œcampâ€ and â€œprofitâ€ double decline, and even enterprises. There was a loss, and from the perspective of corporate net interest rate, in 2015, only 6 companies in 24 LED listed companies had a net profit margin of more than 10%.

Chart 1: Revenue of listed companies in the LED sector in 2015 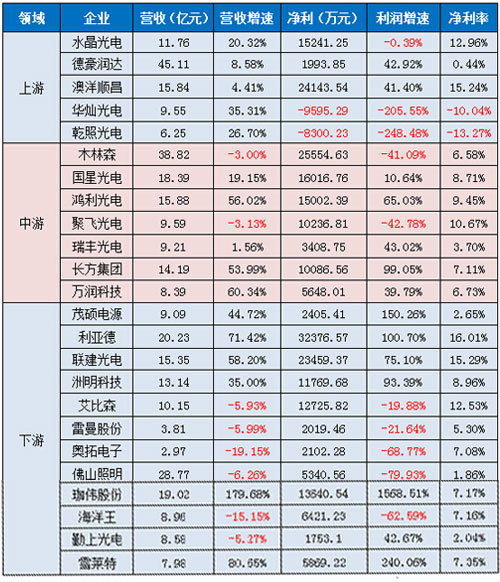 In 2015, it was a year of survival for many â€œfragileâ€ LED companies, because they failed to survive the winter of this year; for many â€œhealthyâ€ LED companies, itâ€™s chilly. One year, because they really feel the taste of death; for a few "physical and healthy" LED practitioners, it seems to be a very "harmonious" year, and there are not many incomes and profits.

However, are these â€œstrong and healthyâ€ LED companies really â€œphysically strongâ€, or do they seem to be â€œexternal and strongâ€ or rely on the â€œtonicâ€ to maintain the â€œvirtual imageâ€? Let us Let's take a look at the truth behind the â€œstrongâ€ corporate performance.

In 2015, among the 24 LED listed companies that have published annual reports or performance reports, 13 companies have â€œcampâ€ and â€œprofitâ€ double receipts, and revenue and net profit growth are more objective. However, behind the brilliant performance of various companies, there is a hidden truth. 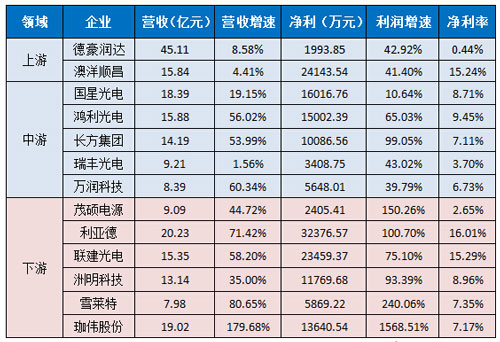 â—‡ In 2015, Guoxing Optoelectronics continued to strengthen the integration of the industry chain and optimize the customer structure. On the other hand, the project was gradually completed, the production capacity was released, and the company's research and development capabilities, quality control capabilities and cost control capabilities were further enhanced. The company's sales revenue, operating profit and total profit continued to grow.

â—‡ In 2015, Liardâ€™s revenues increased significantly, mainly due to the rapid growth of the small-pitch TV market, the performance of M&A companies and the expansion of overseas orders. In 2015, Liard's consolidated operating income reached 527 million yuan, and the net profit reached 125 million yuan. If the contribution of the 2015 mergers and acquisitions company was deducted, Liard's operating income increased by 26.8% in 2015, and net profit increased by 23%. Performance is still impressive.

â—‡ In 2015, Lianjian Optoelectronics achieved revenue of 1.535 billion yuan, a year-on-year increase of 58.2%, and net profit of 235 million yuan, a year-on-year increase of 75.1%. In 2015, the original business of Lianguang Optoelectronics grew steadily. Secondly, the business of UFIDA and EasyCard began to increase its performance for the company in March. According to the restructuring plan, Youtuo Public Relations and Easystar respectively promised that the net profit for 2015 will be no less than RMB 37.2 million and RMB 42 million. If the total performance is deducted, the net profit of Lianjian Optoelectronics will still increase by 16% in 2015. Still considerable.

Relying on mergers and acquisitions to supplement performance

â—‡ In 2015, the company achieved revenue of 1.419 billion yuan, an increase of 53.99%, and a net profit of 101 million yuan, an increase of 99.05%. The company's performance growth was mainly due to the acquisition of Kang Mingsheng. From the date of the merger to the end of the reporting period, Kang Mingsheng went to the Changfang Group. The net profit contributed was 87.671 million yuan. If the performance contribution of this part was deducted, the net profit of the 2015 senior group fell 74%.

â—‡ In 2015, Moso Power's revenue and net profit growth was considerable, mainly due to the steady growth of the company's main business and the consolidation of Founder's FPC business. In addition, the company received 35 million yuan to terminate the major asset restructuring compensation. The company has been able to turn a profit for the company's annual net profit.

Low base in the previous period

â—‡ In 2015, Ruifeng Optoelectronics adjusted its business strategy in a timely manner and continuously optimized the cost structure. The company's profits achieved a large increase and the net interest rate increased.

â—‡ In 2015, in the context of a sharp decline in operating profit, DeHao Rundaâ€™s total profit, net profit attributable to shareholders of listed companies, and basic earnings per share were basically the same as last year, mainly due to the transfer of its subsidiary, Kailei Motor. The income from the equity transfer was 466 million yuan (before tax), which is not the reason, the company is still in a loss state.

It is concluded that only 6 of the 13 listed companies with outstanding performance have achieved rapid growth based on their own business. The six companies are a chip company, two packaging companies and three application companies. The application companies are all based on the display business. Mainly; there are 5 companies that rely on mergers and acquisitions to supplement their performance. If the M&A business is deducted, the performance of some enterprises will decline significantly compared with the performance of the same period last year; in addition, there are two companies that are supplemented by the low profit base and non-operating income. The performance increased significantly. From this point of view, in 2015, the â€œcold winterâ€ was actually â€œfrozen and frostbiteâ€. A large number of enterprises, only 25% of listed companies have achieved good growth. Looking forward to 2016, LED companies that have survived the harsh winter should welcome them. Spring.

The Barrier Terminal Blocks can realize safe, reliable and effective connection, especially in the environment of high current and high voltage.

Barrier Terminal block with easy connection, These connectors are available in all types of wires with 6.35-60mm pitch, with cover and without cover available.