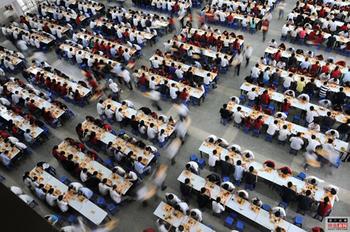 Foxconn is the largest IT foundry company. Its OEM products not only include Sharp, Sony, and VIZIO color TVs, but also Apple's iPhone, iPad and so on. According to Luo Baihui, the secretary-general of the International Model Association, the profits of foundry companies are meagre. Foxconn has always wanted to base itself on the advantages of mold research and development, manufacturing, and assembly, and OEMs have continued to expand toward relatively high-profit links at both ends.

In 2012, Foxconnâ€™s parent company, Hon Hai, invested 66 billion yen and took part in the 10th generation LCD panel line of the Japanese electronics giant Sharp (hereinafter referred to as the â€œDai-generation lineâ€), and obtained half the capacity of the Tenth-generation line. The tenth-generation line can economically cut 60-inch and 70-inch LCD panels, which laid the foundation for Foxconn's expansion in the color TV industry.

After opening up the upstream panel resources and downstream channels, Hon Hai finally has its own TV brand "Rui Xia." According to the understanding of Jinmojia's power grid, Foxconn has defined the "Ren Xia" TV as a "large-size" expert and will launch a 70-inch TV in 2013.

Since September last year, Foxconn has launched Ruixin 60-inch LCD TVs in Taiwan to "test water." Each unit sells for $1,000 and has sold a few thousand units. Luo Baihui believes that as a new brand, Foxconnâ€™s Ruixin TV faces at least three challenges in the Chinese market: brand, price and channel.

Zhang Bing, research director of DisplaySearch in China, believes that the price of 8999 yuan is expensive, and Foxconn's 60-inch LCD TVs sold only 999 US dollars in the North American market last year. In addition, â€œRong Xiaâ€ is not well-known in mainland China, and color TV is a durable consumer product. It takes time for brand accumulation and long-term impact remains to be seen.

Li Yaqin, research director of Quzhi Consulting, believes that â€œRen Xiaâ€ may have some impact on the mid-range market of mainland 55-inch TVs. 55-inch is the mainland's 50-inch TV main specifications, low-end price of about 6,000 yuan, high-end price of 10,000 yuan, 8,000 yuan is the mid-range price, will be the impact of low-end 60-inch TV.

However, Foxconnâ€™s first-ever Ruixin 60-inch TV on the mainland is 2D rather than 3D. "This may be its 'soft rib'." Ya-Qin said that the domestic mid-range 55-inch LCD TVs are basically 3D.

The industry expects that after Tmall starts, Ruixin TV will enter the channel of Hon Hai, such as Cyberspace. However, Li Yaqin believes that the development speed of Cyberspace Digital Plaza in the mainland is not expected to be fast; and even if Ruixin Digital Store will achieve 500 in mainland China in the next three years, it will still be an IT channel, and there will be differences in sales channels with color TV sets, and they will face local conditions. Challenge.

1.  Made of high-quality material, durable and reliable.

2.  Unique design, fashionable appearance, a perfect gift to your child.

4.  Eye protection: no flicker, no glare and soft lighting.